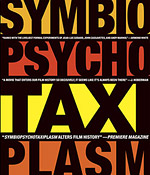 Made in 1968, when the moon was in the seventh house, and American troops were in Vietnam, "Symbiopsychotaxiplasm: Take 1" represents a fascinating and unfortunately forgotten blip on the American movie screen.

Set principally in the leafy green haven of Central Park, "Symbiopsychotaxiplasm" is, at its simplest level, a document of a screen test. For much of the time, we watch two actors (usually Patricia Ree Gilbert and Don Fellows) rehearse. All of this improvised messiness is further complicated because while one camera crew is shooting the screen test, a second camera crew is documenting it - going behind the scenes to record rehearsals and so forth - while yet a third camera crew is documenting the film and the film within the film. Got that?

If all this sounds a bit nuts, dangerously self-indulgent and very of its experimental moment, it is. But it's also highly entertaining and, at moments, revelatory about filmmaking as a site of creative tension between individual vision and collective endeavor. Director William Greaves initially appears somewhat overwhelmed by all the different cameras and the often pushy, mutinous cast and crew. (The often funny, off-site scenes of the crew criticizing the film and its director are studies in why the group process is so often doomed to failure.) Gradually, it emerges that Mr. Greaves is less the dupe of this orchestrated madness than its ringmaster.

"Symbiopsychotaxiplasm: Take 1" was never released theatrically, which is too bad for Mr. Greaves and for the audience he never got a chance to cultivate. The film is being presented by the director Steven Soderbergh. At the Sundance Film Festival last January, Mr. Greaves presented an equally diverting follow-up to his earlier film called, naturally, "Symbiopsychotaxiplasm: Take 2½." In this newest feature, the director returned to Central Park with two of the actors from the first film for another go-round. "Take 2½" is oddly moving because the film reveals not only how time has affected everyone in the intervening years but also how very straight filmmaking in this country has become.

It's a wonderful gift to us that "Symbiopsychotaxiplasm: Take 1" has finally made it into theaters. But how about its equally far-out sequel? (M. Dargis, NY Times)