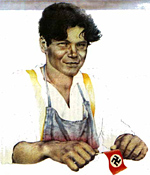 A young farm boy, Lucien (Pierre Blaise), tries to join the French Resistance but is rejected because of his youth. The Gestapo, however, is happy to have him and treats the boy royally, supplying him with liquor and anything else he requests. He then makes the mistake of falling in love with a Jewish girl, France (Aurore Clément), resulting in her father's deportation. With France and her mother in tow, Lucien sets out for Spain with the Resistance out to kill him.

Much of Malle's motivation came from his own experiences growing up in France during the German Occupation. Even so, his fellow countrymen did not care very much for this cutting portrayal of the Resistance. Their vocal indictments inspired Malle to migrate to America, where he made such films as ATLANTIC CITY (1980) and PRETTY BABY (1978). The film features a great score by Django Reinhardt. (CineBooks)