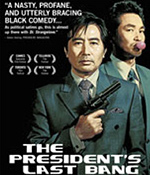 Im Sang-soo's transcendently good political satire The President's Last Bang is so far the smartest, chanciest flick of the year--an alchemical brew of balls and technical brilliance that produces tremors of recognition and aftershocks of import. Whether it's DP Kim Woo-heong's rapturous tracking shots or Kim Hong-jib's tango soundtrack, there is something ineffable embedded in the fabric of the piece, making of the assassination of South Korean president Park Chung-hee something like the boxing sequences of Scorsese's Raging Bull.

It's appropriate: with Park a puppet of big business (it's rumoured that Samsung launched a campaign to discredit the picture prior to release, in part through the censoring of documentary footage owned by Samsung's sister-company CJ Entertainment) and an officer of the Japanese army occupying Manchuria during WWII, hunting down members of the Korean Independent Army arm-in-arm with Hirohito's wolves. (Park's assassin calls him by his Japanese name before he kills him--not a popular decision.)

Im frames his action in short segments, little dances of torture and madness, kidnapping and other florid abuses of power, having at one point a military man deliver his frothing soliloquy in his underwear. With the sly thought that maybe the butler did it, Im encompasses a nation's class, politics, military/industrial infrastructure, and skeletons in the closet with the same elegant outrage. It's one of the best films of the year--more so for how it turns up the heat, ever so slightly, on our own turbid waters. This, not well-intentioned fluff like Good Night, and Good Luck., is how to do righteous indignation. (W. Chaw, Film Freak Central)