Atmospheric Horror from the Director of CURE 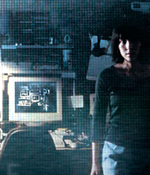 In Kiyoshi Kurosawa's Pulse, the Internet is populated by ghosts. Their presence on the network helps make human beings, who have turned to the net for the illusion of community and companionship that it offers, even more isolated and aware of their fundamental solitude in the universe.

Simultaneously apocalyptic and existential, Kurosawa's film is deeply ambivalent toward technology-it feels a bit like a Luddite's objection to AOL chat rooms and webcams. Indeed, just like the American slasher films that punished teenagers for their sexual promiscuity, Pulse first obliterates the characters who are most intimate with computers. The first indication that something is not right in the world comes when a computer geek working on some unspecified project goes incommunicado and unexpectedly commits suicide; the disc that one of his co-workers recovers from his desk contains some very disquieting imagery.

Meanwhile, the amiably computer-illiterate Kawashima befriends Harue, a computer-lab worker who's interested in his unusual tech-support issues. It seems the Internet is dialing him up, rather than the other way around, and asking him if he wants to meet a ghost. It's his ability to convince her that life is worth living that Kurosawa is truly interested in.

The central premise here is that technology aggravates, rather than assuages, our existential loneliness.

Plot mechanics aside, Kurosawa tells his story using some of the creepiest imagery yet seen, exploring the question of how ghosts might manifest themselves before the living. Pulse's best scenes are so magisterial and disturbing that you may want to crawl under your chair. However, Kurosawa takes his sweet time in getting to them. The first 20 minutes or so qualify as one of the greatest horror-movie overtures I've ever seen. (B. Frazer, Deep Focus)