The Beauty Academy of Kabul

Women in Afghanistan assert themselves in a new school 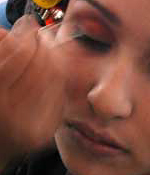 Filmmaker Liz Merman traveled to Afghanistan to document the opening of a beauty school and salon in the summer of 2003. Three hairdressers from New York have come to run the school and teach classes including Afghan expatriate named Sima who left her native country more than 20 years ago.

The 74 minute doc not only captures the headaches and problems attendant in opening up the school (tracking down the 19 dummy heads on which students will tease, comb, cut and brush hair) but also profiles some of the Afghan women in the classes taught and provides unforgettable images of decimated buidings on urban streets.

In BEAUTY ACADEMY not only do we get to see the normal clash between a prosperous secular culture and poor religious culture but more importantly, in highlighting some of the students at the school and their stories as well as their take on life, we get at least a taste of the inherent duties and tasks required of an Afghan woman.

One of the profiles that stands out is a young woman who talks to Patricia about romance. In Afghanistan, marriages are arranged and this young lady states on camera that if she were in love her brother would beat her. But it turns out that she is in love and has secretly been for 9 years. When she discusses this, her face lights up and she smiles, her face just shines with warmth and love and for a moment or two she briefly jettisons her wariness and caution and just seems like a beautiful young lady not just an abstract symbol of female oppression in Afghanistan.

Never has a woman getting her hair done seemed so touching and so assertive a individual choice as it is here in BEAUTY ACADEMY OF KABUL. (A. Lanier, Ain't It Cool News)

The Beauty Academy of Kabul