Powerful, haunting film about sex and selling out gets under your skin 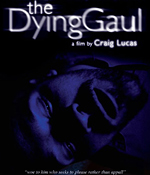 With humor and rage fighting for dominance, debuting director Craig Lucas drives a stake into the dark heart of Hollywood. He knows the territory. Lucas the playwright (Prelude to a Kiss) is savvy about how studios destroy talent and souls. Robert, the writer played by Peter Sarsgaard, does not. When he meets with studio exec Jeffrey (a pitch-perfect Campbell Scott), the charming devil offers Robert a million bucks for his screenplay about his AIDS-stricken lover for the screen. There's a catch: Robert must change the pair from gay to straight. This is 1995, pre-Will and Grace and other gay-friendly sitcoms. Homophobia is rampant. Not with Jeffrey. He invites Robert home to Malibu to meet his wife, Elaine (Patricia Clarkson), and their two kids. He also offers to lick Robert's body, head to toe, and bring him to his splashiest orgasm. Before long, Robert accepts. Elaine knows nothing of this until she logs on to a gay chat room favored by Robert and learns harsh truths about him and the devious man she married. Lucas the director serves Lucas the playwright beautifully, giving the film a seductive gleam that only enhances the shock when he reveals the toxicity underneath. The actors could not be better. Sarsgaard, Scott and the luminous Clarkson negotiate the film's razor-sharp laughs and bone-deep tragedy with resonant skill. Lucas' powerfully haunting film gets under your skin. (P. Travers, Rolling Stone)