Vital viewing; a microcosm of political intimidation in America 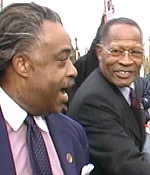 Absolutely vital viewing for anyone interested in how our best intentions are constantly ruined by the people we trust the most, Marshall Curry's Street Fight follows the difficult campaign of Cory Booker, the young, handsome son of Civil Rights activists as well as a Rhodes Scholar and Yale Law graduate who turned away from a lucrative living to try to effect change in downtrodden Newark. But his campaign efforts are turned away at every move by entrenched incumbent Mayor Sharpe James: shockingly playing the race card (both men are black), the mayor alleges that the light-skinned Booker isn't "black enough" and is the product, perhaps, of a Jewish conspiracy intent on installing a "great white hope." James' tactics run the gamut from closing down businesses that support Booker to actually physically intimidating Booker supporters. It'd be surprising if it weren't unsurprising--and Curry, his film crew a victim of intimidation at a James rally, shoots the shenanigans with a mute outrage. A scary look at how race and class divisions are perhaps the most venomous when they afflict the same race and class (cancer is one metaphor, flesh-eating virus another); look to James' smooth oratory skills as his ways and means of convincing blue-collar voters to side against their own economic and social interests. Not too much to call Street Fight a microcosm of a crippling national disease. (****, W. Chaw, Film Freak Central)