A Japanese LAVERNE & SHIRLEY on Acid 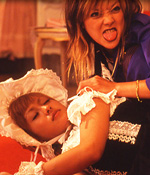 When it comes to quirky and eccentric fashion, you can't beat Japan's youth culture. One current trend is the Lolita look, where teenage girls doll themselves up in frilly, Bo-Peep dresses full of embroidered lace and rococo romanticism. The amusing "Kamikaze Girls" shows what happens when one such delicate flower finds an unlikely ally with a rough and foul-mouthed girl from a biker gang.

Stylistically, "Kamikaze" outdoes Tarantino at his own flamboyant game. Director Nakashima Tetsuya, making his feature film debut after an award-winning career in commercials, is fearless with cinematic tricks. He jumps the narrative back and forth in time, employs numerous freeze frames and animation sequences, has characters talk directly to the camera and compiles a soundtrack that is schizophrenically mishmash.

In short, the premise of "Kamikaze" might be similar to a younger and kitschy "Thelma & Louise," but it is never less than appealingly surreal.

Japanese idol Fukada Kyoko is the bonnet-wearing Momoko, a high-schooler with a bad case of small-town ennui. Her only escape is to imagine herself among the aristocrats of 18th century French nobility. She meets Ichiko (Anna Tsuchiya), a biker chick whose look is very different from Momoko. Ichiko looks more like Shirley Manson -- red lipstick and raccoon mascara eyes -- with a samurai robe. Despite their fashion differences, deep down the two are equally lonely and alienated misfits.

Not just another rebellious teen tale, "Kamikaze" also is wildly ironic fun. However, it is less a comedy than a full-on live-action manga. Tetsuya captures the book's sly yet brash commentary about Japanese society and its ever-conspicuous obsessions. At the same time, it also is a touching tale of friendship that is, like Ichiko, too cool to let its street-wise facade drop for even one sentimental minute.

Appropriately outlandish in parts but with a heart as golden as the cinematography's glinting sun, "Kamikaze Girls" might be kawaii cute, but it rules with its own brand of girl power. (A. Sun, Hollywood Reporter)