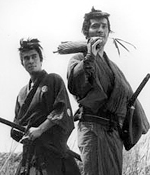 Kihachi Okamoto will forever rank among Japan's better jidai geki filmmakers for creating the visually stunning Sword of Doom (1966), a movie that like Clint Eastwood's masterfully dark supernatural Western High Plains Drifter, blurs the line between a lone antihero exacting revenge and a death-dealing specter from the netherworld. For Kill!, Okamoto teams up yet again with Sword of Doom star Tatsuya Nakadai.

Broad parallels to Yojimbo can certainly be drawn. The barren village of Joshu is disturbed by the arrival of two tattered ronin, who soon find themselves caught up in the middle of a complex plot to cover up a murder and replace the local commissioner. Nakadai loosely assumes Toshiro Mifune's wandering swordsman role as Genta, a jaded former samurai looking to put his past behind him, yet drawn to aid seven samurai hired by Ayuzama for an assassination.

Although hardly the striking image of a master swordsman, especially when he's initially carrying a bamboo sword, Genta uses his wits to play both sides and watch over his newfound friend and fellow ronin, Hanjiro Tabata (Etsushi Takahashi), a simpleton and former farmer with dreams of becoming a samurai.

Within the intentionally convoluted plot, Okamoto is able to poke fun at the samurai genre. Really, the story itself is somewhat absurd with its many subplots. But Okamoto makes sense of it all.

Nakadai turns his considerable screen charisma to portraying the classic heroic rogue. He's the Han Solo of the Tokugawa era, facing adversity with a wry expression, staying emotionally detached and almost always staying one step ahead of his enemies, almost.

Kill! is a movie probably best appreciated by veteran fans of jidei geki with a taste for black comedy. But even without perspective on the genre or a cynical streak, the movie holds its own well. It's vivid cinematography, rollicking music, robust (and wholly unoriginal) story, and plentiful action make this an enjoyable viewing by just about any measure. (M. Pollard, Kung Fu Cinema)