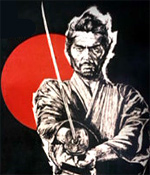 Another grizzled, grumpy and growling unemployed samurai of the sort that we've seen prowling around the premises in any number of postwar Japanese costume films is the hero of "Harakiri," the first chambara (sword-fighting) film directed by Masaki Kobayashi.

This samurai is not the familiar old sword fighter offering his sword for hire. He doesn't hanker to carve an opponent; he hankers to carve himself. He wants to commit harakiri, the ritualistic form of suicide, which consists of drawing a sword across one's stomach, favored by played-out samurai.

Before he performs this self-destruction, however, he wants to get his ironic revenge on a certain new-fangled 17th-century clan chief against whom he has a particularly grievous personal grudge. He wants to shame and humiliate this tyrant for what he has done to his unemployed son-in-law, which in turn has resulted in the death of his daughter and the latter's infant son.

Most of it is played with the hero—or, before him, his son-in-law—squatting in the harakiri posture on a low, white platform in the courtyard of the home of the lord who has granted the use of his palace for the ritual suicide. Gathered about are the lord and his attendants who have come to observe. As it turns out, they're dragged in to listen to the old warrior more than to see, and what they hear (as conveyed to us in flashbacks) is a dismal and depressing tale indeed.

It is a tale of how the old samurai are so neglected and badly used that they have nothing to do but go about begging and committing suicide. But the climax, at least, is an explosion of vindictive violence, spurting blood and romantic retribution upon the new political group.

Mr. Kobayashi does superb things with architectural compositions, moving forms and occasionally turbulent gyrations of struggling figures in the CinemaScope-size screen. He achieves a sort of visual mesmerization that is suitable to the curious nightmare mood. And he uses his actors like weird puppets in this tensely drawn mise-en-scène. (B. Crowther, NY Times)