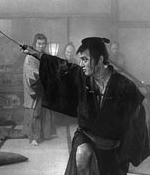 A brooding, powerful performance by Tatsuya Nakadai as a bloodthirsty master bladesman gives "The Sword of Doom," The Toho Company's melodrama of old Japan, a cutting edge.

This is a stark, meshed and well-made film not for the squeamish. It has been adapted from a novel by Kaizan Nakazato under the mobile direction of Kihachi Okamoto, with a good cast of expressive players, including Toshiro Mifune, in a feature role. From an artistic standpoint, the master director of Japan, Akira Kurosawa, has bettered Mr. Okamoto in earlier re-creations of the era of Samurai might and ancient tradition, when family honor and life itself hinged on the sword.

But this film does well enough tracing the slow disintegration of an aristocratic, savage loner and his murderous determination to master fate at swordpoint. American moviegoers unaccustomed to head-on samplings of kimonoed mayhem—and even those who are—will find it a real grunt-and-groan sword-swinger, with the chop-choppingest climax, ever. Be warned.

This dreadful, climactic sequence of wholesale carnage, when the pent-up hero goes berserk in a houseful of assassin accomplices, splatters the eye. But smiting it simultaneously is the anguish of Mr. Nakadai. And this is the point of the picture, as conveyed by Mr. Mifune, in a firm, forceful performance as head of a fencing school. (H. Thompson, New York Times)