Enlightening doc captures the exalted and the grubby 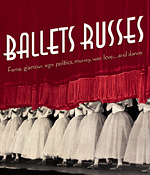 In 1929 Serge Diaghilev, whose name is pretty much synonymous with ballet impresario, died in Venice. His passing left a void not only at his famed company, the Ballets Russes, but also in the larger world of dance. The companies that tried to fill that void are the subject of "Ballets Russes," a graceful and fascinating new documentary by Dan Geller and Dayna Goldfine.

Like New York City pizzerias, the successor organizations laid claim to their predecessor's august and commercially potent name: the first, run by the dancer and choreographer Leonide Massine, was known as the Ballet Russe de Monte Carlo. The second, overseen by Col. Wassily de Basil, called itself the Original Ballet Russe. They also competed for the allegiances of dancers and audiences, a struggle that gives this film's historical narrative an air of show business intrigue.

And "Ballets Russes" does tell a marvelous story of midcentury show business, encompassing both the most exalted expressions of pure art and the sometimes grubby commerce that sustained it. The filmmakers, who spent years gathering rare clips and artifacts, triumphantly demonstrate the almost magical power of archival documentary. Dance is, axiomatically, the most ephemeral of art forms, expiring the moment it comes into being. But here it achieves at least a virtual immortality, as the remarkable accomplishments of dancers, choreographers, and costume and set designers come alive, briefly and sometimes blurrily, on the screen.

But the real life force pulsing through "Ballets Russes" - what makes it a delight even for a dance philistine like this critic - belongs to the veterans of the two companies. Many of these dancers were well into their 80's when they were interviewed for the movie, and several have since died, but they remained spirited and active to the end. (A.O. Scott, NY Times)