The Most Lavish and Expensive Hindi Film Ever Made 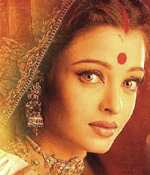 Bhansali is a brilliant visual storyteller who layers abstract stylization with a charged dramatic construction. The movie exists in a kind of fever world, set off by the ravishing design of deep, imposing colors; an elaborately theatrical physical design; and outsized sensation.

But the movie's story progresses within a sharp, traditional register of longing, memory and loss. The story's centerpiece concerns the thwarted love of the title character (Shahrukh Khan), a London-trained lawyer of an economically elite clan, and the beautiful Paro (Aishwarya Rai), the man's childhood neighbor and the daughter of a less socially privileged family.

The attraction of the young couple is profound, though their union is impeded by the social restrictions of Paro's background.

Bhansali frequently breaks off the story and deploys six often surreal, breathtaking musical numbers that are exquisitely calibrated to achieve a delirious sense of pure ecstasy. With Rai, he has the perfect projection of absolute desire. He shoots her the way Sternberg photographed Marlene Dietrich, as a fetish object of exotic worship. Fortunately, she is more than a great beauty, and she moves gracefully and with an electric presence as a dancer. Her number with the equally sublime Chandramukhi is an absolute showstopper, a moment that transcends most of the emotional properties of cinema and becomes a moment of absolute wonder.

"Devdas" is a meditation on history, family and social order, but the actors transform the theoretical into a moving immediacy. By the time of its harsh conclusion, it is all but impossible to not be thoroughly wiped out by the emotional transactions that occur. It does what the movies were meant to do: move, dance and swirl in the popular imagination. (P. McGavin, Chicago Tribune)

India, 2002, in Hindi and Bengali, Color 182 min. There will be an intermission for this film. • official site