Games of Love and Chance

Prescient of the French Riots and Winner of Four César Awards 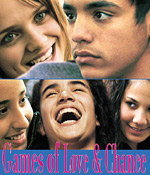 Past and present ferociously head butt each other in Games of Love and Chance (L'Esquive), a French drama in which an insult like "Fuck you, you fuckin' faggot motherfucker!" reverberates with classical subtext. Congregating in the hallways and courtyards of a Paris housing project, groups of teens engage in rapid street talk, piling on profanities with cavalier abandon. United in vulgarity, they're also bonded by an unlikely academic endeavor—the mounting of a class play by the 18th-century dramatist Pierre Carlet de Chamblain de Marivaux, an altogether different kind of wordsmith whose verse must seem as foreign to them as the Eiffel Tower or the Louvre.

In the Marivaux comedy from which the movie takes its English title, the identity-swapping characters discover that they can't escape their class-determined destinies. The movie poses a parallel predicament: Can great literature lift these banlieue adolescents out of their dreary surroundings?

The most enthusiastic taker is Lydia (an excellent Sara Forestier), a bossy beauty who's playing the lead in the school production and who dispenses much unsolicited direction during rehearsals. For all of her take-charge attitude onstage, she finds herself on the defensive when it comes to everything else. Her dilemma is embodied by the movie's French title, L'Esquive, a fencing term for dodging that foretells the feats of evasion she must perform whenever libidos flare.

Unlike American counterparts Kids or Dangerous Minds, this highly intelligent comedy (which cleaned up at this year's Césars) doesn't seek to shock or inspire, but merely documents teen moodiness in all its tedious unpredictability. It also avoids making big political statements, seldom drawing attention to the ethnicity of its cast, who are mostly of Arab, African, and Asian descent. (D. Ng, Village Voice)

Games of Love and Chance