Two women drift through the pall of global mediocrity 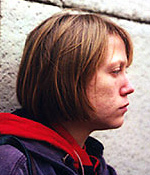 Jem Cohen's nightmarish portrait of a deracinated world includes footage shot over 10 years in several countries but cut together so seamlessly that the film seems to unfold in a single, continuous strip of malls, hotels and airports. It's driven by two voice-overs and an aural montage of advertising jingles, road sounds, prerecorded telemarketing pitches and snippets of hymns.

Tamiko (Miho Nikaido), a Japanese businesswoman in her early thirties, is part of a team working on a long-term project to export Japanese-style amusement parks to the rest of the world. Tamiko's job takes her to Canada and Eastern Europe, but mostly she crisscrosses America, researching trends in entertainment and real estate, sitting in on meetings and writing reports. She's constantly on the road, amazed by the vast, dirty, racially heterogeneous chaos of America, which she only sees through windows. She misses her family, she says, but she isn't homesick. Sometimes her job seems like a dream.

Teenage runaway Amanda (Mira Billotte) stole from her mother and her half sister before hitting the road. She squats in abandoned houses — dozens dot the no-man's-land outside suburban malls — and cleans motel rooms; without a fixed address or phone number she can only pick up work at failing, family-owned places doomed by national chains. Amanda spends her downtime hanging out at the mall, pretending to make calls on a broken cell phone and filming herself with a video camera she found under a bench.

Both women are adrift in a world of food courts, enclosed walkways, rented rooms and prefabricated amusements; they're surrounded by obscene plenty and seduced by the allure of things, but increasingly removed from human contact and the rhythm of rooted lives.

Cohen's spooky portrait of the big empty was shot in Dusseldorf, Warsaw, Vancouver, Melbourne, Paris, Berlin, the Netherlands and a dozen U.S. cities; the melancholy joke — if you can call it that — is that the pall of global mediocrity has erased national differences and turned women like Tamiko and Amanda into ghosts drifting through their own lives. (M. McDonagh, TV Guide's Movie Guide)