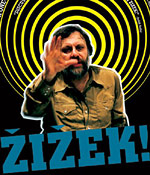 If you see only one documentary about a Slovene philosopher this year, it will most likely be Astra Taylor's "Zizek!," a brisk little film whose title character, Slavoj Zizek (SLAH-voy ZHEE-zhek), is surely the most famous Slovene philosopher in the world. This is not a joke, even though it sounds like one, and even though Mr. Zizek is funnier, in person and on the page, than anyone whose mission is to fuse Hegelian dialectics with Lacanian psychoanalysis has any right to be.

He is also an international academic celebrity, a role he embraces with some ambivalence. Filmmaker Astra Taylor follows her subject from Buenos Aires to New York, where he speaks before adoring crowds, and home to Ljubljana, where he lives in a modest, book-crammed apartment. A shambling, unkempt bear of a man, he talks a blue streak of fluent, juicily sibilant English - in lecture halls, in restaurants, in video stores, and even in bed - and while he is often playful and self-mocking, he is never less than completely serious.

"Zizek!," however, is not so much an introduction to his thought as an advertisement for it. His books (including "Enjoy Your Symptom!," "The Sublime Object of Ideology," "Tarrying With the Negative" and many others), while difficult, are notable for the clarity with which they present the central contradictions of life in the post-Communist, late capitalist world, where social and psychic control is exercised not by the repression of desires, but rather by their creation and partial fulfillment. While Karl Marx and the French Freudian Jacques Lacan are his main influences, his intellectual toolkit also includes Alfred Hitchcock and Saint Paul. The bravura with which he mixes them all up - along with Soviet-era jokes and observations on restaurant behavior and bathroom design - has made him an intellectual superstar, a curious mixture of guru and buffoon. (A.O. Scott, NY Times)