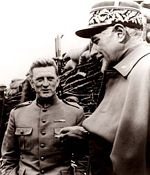 There is a perennial question: is there any such thing as an anti-war war movie? If it's screenable for our boys, it ain't anti-war. Sam Fuller made the useful distinction between those movies that smacked of "recruitment flavor" and those that didn't. And when it comes to recruitment flavor, Stanley Kubrick's 1957 Paths of Glory has a definite deficiency.

Kubrick's pitiless evocation of World War I's Western Front (based on Humphrey Cobb's 1935 novel, itself inspired by actual events footnoted in the book) demonstrates that the primary victim is the enlisted man.

There's a near mathematical logic to the scenario, and the cruelty is compounded by class.

Driven by ambition, a half-mad French general (George Macready) is persuaded by his oily superior (Adolphe Menjou) to undertake an impossible assault on an impregnable German position. In the heat of battle, the increasingly crazed general panics and—as the suicidal attack fails amid catastrophic casualties—orders the artillery to fire on the "cowards" under his command. Naturally, the general takes no responsibility for the debacle. Three of his men are selected, not quite at random, for court-martial, and despite a spirited defense by their colonel (the movie's star and producer Kirk Douglas), they're sentenced to death.

Stealing the show as one of the condemned is Brooklyn-born Timothy Carey, a self-taught Method actor (with a uniquely shambolic method). Carey's smirky drawl, inappropriate giggles, cud-chew line reading, and sobbing swan song contribute immeasurably to the movie's existential edge.

Paths of Glory was banned in France until 1975. But deliberately or not, everyone in the cast is so overwhelmingly American, you have to wonder how it would play in Washington today, or Iraq.