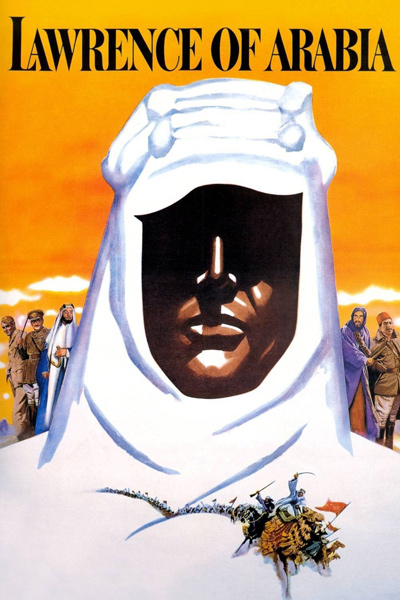 What a bold, mad act of genius it was, to make ''Lawrence of Arabia,'' or even think that it could be made. The impulse to make this movie was based, above all, on imagination. The story of ''Lawrence'' is not founded on violent battle scenes or cheap melodrama, but on David Lean's ability to imagine what it would look like to see a speck appear on the horizon of the desert, and slowly grow into a human being.

There is a moment in the film when the hero, the British eccentric soldier and author T.E. Lawrence, has survived a suicidal trek across the desert and is within reach of shelter and water--and he turns around and goes back, to find a friend who has fallen behind. This sequence builds up to the shot in which the shimmering heat of the desert reluctantly yields the speck that becomes a man--a shot that is held for a long time before we can even begin to see the tiny figure. On television, this shot doesn't work at all--nothing can be seen. In a movie theater, looking at the stark clarity of a 70mm print, we lean forward and strain to bring a detail out of the waves of heat, and for a moment we experience some of the actual vastness of the desert, and its unforgiving harshness.

''Lawrence of Arabia'' is not a simple biography or an adventure movie--although it contains both elements--but a movie that uses the desert as a stage for the flamboyance of a driven, quirky man. Although it is true that Lawrence was instrumental in enlisting the desert tribes on the British side in the 1914-17 campaign against the Turks, the movie suggests that he acted less out of patriotism than out of a need to reject conventional British society, choosing to identify with the wildness and theatricality of the Arabs. There was also a sexual component, involving his masochism.

To see it in a movie theater is to appreciate the subtlety of F.A. Young's desert cinematography--achieved despite blinding heat, and the blowing sand, which worked its way into every camera. ''Lawrence of Arabia'' was one of the last films to actually be photographed in 70mm (as opposed to being blown up to 70 from a 35mm negative). There was a hunger within filmmakers like Lean (and Kubrick, Coppola, Tarkovsky, Kurosawa and Stone) to break through the boundaries, to dare a big idea and have the effrontery to impose it on timid studio executives.

After its glorious re-release in 70mm in 1989, it has returned again to video, where it crouches inside its box like a tall man in a low room. You can view it on video and get an idea of its story and a hint of its majesty, but to get the feeling of Lean's masterpiece you need to somehow, somewhere, see it in 70mm on a big screen. This experience is on the short list of things that must be done during the lifetime of every lover of film. (R. Ebert)