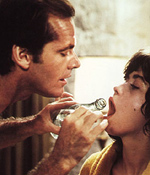 There have been many years and changes in the landscape of film since 1975, but Michelangelo Antonioni's "The Passenger" still packs a wallop. Re-released in its original form, the slightly longer European cut known as "Professione: Reporter," this moody Jack Nicholson political thriller remains a great, bizarre film, full of beauty, mystery and riddles with no answers.

Starring Nicholson as the ultimate identity thief, "The Passenger" first came out at a time when major studio films with big stars like Nicholson were far more artistically adventurous.

Shot in a scenically dazzling variety of locations, including Algeria, Germany, Britain and Spain, it's a film that also seems at first glance very tied to its era: a '70s hybrid travelogue-thriller full of radical politics, angst and anomie.

Nicholson plays famous TV reporter David Locke, who, while covering a civil war in Africa, suddenly decides to switch identities with a man who dies in his hotel, a talkative stranger named David Robertson (Chuck Mulvehill). David keeps his new identity's itinerary in Germany and Spain before discovering that Robertson was a gunrunner with an important contract to fill with those African insurgents. Increasingly caught in a political crossfire, the poseur also falls into an affair with the feisty architecture student who keeps popping up along the way, played by Maria Schneider.

The movie climaxes with one of the most famous cinematic coups of its era: a seven-minute, near-worldless single-take sequence in a small Spanish hotel where David's mysterious destiny arrives in a sunny haze of prowling camera movements, anticipation and dread.

Back in 1975, I was disappointed in "The Passenger" because of what I saw as its pretensions. Now, when fewer films on this level of ambition are made, with this kind of richness and resource, it looks as classic and lasting as "Blow-Up" or "L'Avventura." It raptly recalls a time when the world may have been as uncertain as now, but the movies were often lovelier and more daring. (M. Wilmington, Chicago Tribune)