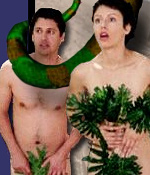 The Colorado Film society is proud to announce an encore screening of the "The Real Old Testament," on Tuesday, January 31, at 7:00 p.m. in University of Colorado's Muenzinger Auditorium. This hilarious satire of the Old Testament book of Genesis, done in the style of MTV's "Real World," was a highlight of the 2005 Boulder International Film Festival. General admission is $5.00, $4.00 for students. Director Curtis Hannum, a CU graduate, will attend the screening.

"'The Real Old Testament' is an excellent precursor to this year's Boulder International Film Festival, and we are delighted to have Curtis join us from California for this presentation," said Robin Beeck, executive director of CFS and BIFF. "It received rave reviews from audiences at BIFF 2005, and we think a college audience will appreciate the 'Real World' style." This year's Boulder International Film Festival will take place February 16th through 19th.

The intention of "The Real Old Testament" is to portray iconic historical figures as real people with faults and feelings. While the content remains faithful to the scripture, the comedic spin makes this film a favorite at festivals throughout the country.

Boulder is a perfect venue for the droll humor of "The Real Old Testament." After the screening at BIFF 2005, Curtis Hannum commented, "Boulder has the hippest audiences I've ever seen. They laughed at every obscure, inside joke that I had stuck in there."

Currently, Curtis and his brother, Paul, are producing a daily "God Vlog," (www.thegodvlog.com) and creating their own web channel for their productions (www.realoldtestament.com). They're also gearing up to produce their second film, a parody of "The Osbournes," that depicts the clash between Neanderthals and the first modern humans that entered Europe.