Claire Danes and Steve Martin keep it sweet and simple 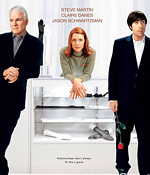 Shopgirl becomes a kind of minimovie built around the loneliness of a young woman (Claire Danes) who sells gloves for evening wear at Saks Fifth Avenue in Beverly Hills. This is not the kind of nagging loneliness that drives people insane; it's the routine isolation experienced by women who drive to and from their solitary apartments, perhaps hoping someone eventually will offer the balm of love.

Danes beautifully captures the poignant quality of Mirabelle's life. Mirabelle aspires to be an artist, struggles to pay her college loans and works in the plush environment of an upscale department store, where she stands alone behind a counter that isn't exactly the scene of land-office business. Danes gives the movie a big heart, but her performance never pleads for our sympathy.

Martin plays Ray Porter with a calm that recalls the surface of a pond on a windless day. Ray is a successful businessman who seems to have sufficient funds to do whatever he wants. Ray knows Mirabelle is isolated. He's able to spend money on her, but never in ways that feel tawdry. Mirabelle may not be totally fulfilled by Ray, but she's not badly compromised, either.

Taking his cue from Martin's script, Tucker (Hilary and Jackie) keeps the stakes low, and you get the impression that you're watching a movie about a passing stage.

Martin's script doesn't make room for villains. Ray's relationship with Mirabelle isn't entirely one-sided. Shopgirl can be a little too bloodless: It's best seen as a snapshot rather than a museum-quality portrait. Tucker's camera captures Mirabelle in a transitional moment that's plaintive but not ruinous. That's the movie's way: The characters in Shopgirl may not live happily ever after, but they're probably going to get through their lives without showing any terrible scars. (R. Denerstein, Rocky Mountain News)