Uncovers a retail giant's assault on families and American values 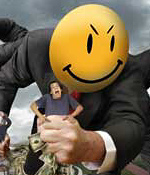 Wal-Mart: The High Cost of Low Price is the newest film from director and producer Robert Greenwald, and the first from his new venture, Brave New Films.

The film takes the viewer on a deeply personal journey into the every day lives of families struggling to fight against a goliath. From a small business owner in the Missouri to a preacher in California, from workers in Florida to a poet in Mexico, dozens of film crews on three continents bring the story of an assault of families and American values. Current and former employees, managers and executives will tell all about the corporation's inner-workings. Wal-Mart is based on individual human beings, all over the world, at all levels of society, telling their story in very personal terms.

Followed by speaker and discussion.