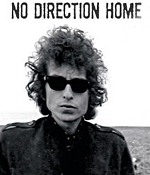 The two-part film, which focuses on the singer-songwriter's life and music from 1961-66, includes never-seen performance footage and interviews with artists and musicians whose lives intertwined with Dylans's during that time. " When we first began discussing this project years ago, we were overwhelmed by the material at hand--home movies and history-making concert footage, fascinating interviews with Dylan's friends and fellow performers and, of course, Dylan him self, speaking so frankly about this incredible period in his life. What we needed, above all, was an artist with a singular vision who could fuse this material into a unique visual narrative. That artist was Martin Scorsese, who graciously agreed to direct." , Executive Producer, Susan Lacy

NO CHARGE FOR ADMISSION. TAX DEDUCTIBLE DONATIONS WILL BE ACCEPTED FOR ROCKY DIALOGS ( 501C3) TO FURTHER PRESENT TENSE PROGRAMMING. FEEL FREE TO COME AND GO AS YOUR SCHEDULE PERMITS.