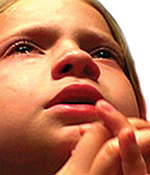 Filmmakers Rachel Grady and Heidi Ewing provide the moviegoer with an intense look at how Evangelical Christians are educating and training their children, and also, how they function as a political movement in this country. (J. Kaplan, Kaplan vs. Kaplan)