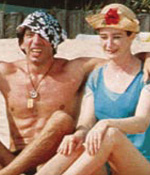 A group of 20 vacationers arrive in a vacation village on the shores of Africa in need of a few days rest and relaxation. And they are determined to make the most of their vacation. The story takes us on tragic, yet hilarious adventures.