Into the Arms of Strangers: Stories of the Kindertransport 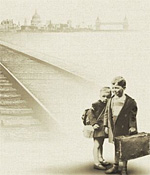 This Academy Award-winning documentary chronicles one of the lesser- known stories of the Holocaust: that of the kindertransport, which saved the lives of 10,000 Jewish children who were sent by desperate parents to England to seek refuge from Nazi oppression. Introduction and Q&A with director Mark Harris. Made possible by the Conference on World Affairs and the Roser Visiting Artist Fund.

Into the Arms of Strangers: Stories of the Kindertransport