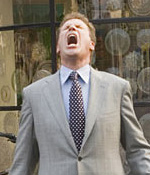 It takes a director (Marc Forster) with a deep taste for fantasy and story, and a writer with a concept to test the boundaries of both (debuting Zach Helm) to engage in a whacky premise in which the hero (Will Ferrell) is the product of a writer's mind as she's writing. (J. Brenner, Cinema Signals)