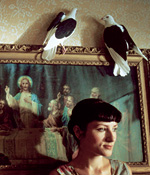 A painterly eye and dark humor inform this Silesian tale of a young male virgin who must be sacrificed to save the world. Majewski portrays a community responding to World War II and Stalinism with primitive metaphysics.