The Brothers Quay Retrospective, Part I

Shorts from the Brothers Quay 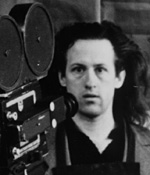 The Brothers Quay Retrospective, Part I