The fun, the obscure, the oddities 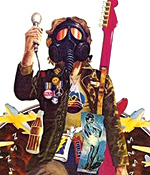 Jeff Stafford, a friend of the IFS who works at Turner Classic Movies, donated boxes and boxes of old 16mm trailers for our perusing pleasure. Tonight, we put together a highlight reel of some of our favorites. They'll include musical oddities, erotically charged phantasmagoria, obscure blaxploitation pics, and much more. You won't see this anywhere else!