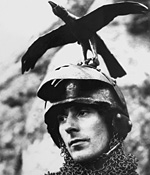 A haunting, austere ballad about a knight's quest for a gold-stringed harp whose sound is said to bring peace and harmony. The film's imagery is inspired by medieval icons.