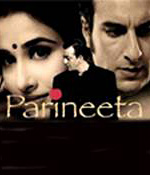 Sarat Chandra Chattopadhyay's (Parineeta, Devdas….) poetic prose comes to life in Vidhu Vinod Chopra's cinematic adaptation of PARINEETA - The Married Woman (subtitled). The city of Calcutta – 1962. A city so vibrant, so alive, so stylish, it was referred to as 'The Paris of the East.' This exotic backdrop serves as the perfect locale for the tender, immortal love story about to unfold.

A young girl: Lolita, orphaned at an early age, is sent to live with her uncle's family, where destiny introduces her to ... A young boy: Shekhar, a budding musician, the son of an affluent businessman.

Together, through childhood and adolescence, Shekhar and Lolita share joys and sorrows, fond memories and bittersweet experiences... and unknown to them, a relationship of deep friendship and trust takes place. It is an unspoken right they hold over each other that metamorphoses into a love so intense, they do not even see it coming.

It takes the arrival of an outsider, Girish, for them to discover their true feelings for each other. The chemistry between Lolita and Shekhar sizzles and sparkles, till it explodes. But fate has something else in store for them.

Greed, deception and malicious intent are waiting to plague Lolita and Shekhar's innocent love. Events twist and turn beyond their control, spin around them in a maze of suspicion, misunderstandings and high tempers…till even their love cannot stop them from being torn apart.

Can true love conquer these insurmountable obstacles, or will it succumb to them? Will Lolita and Shekhar be forever swept apart by these tumultuous events or can they fulfill their destiny and come back together?

Watch the contemporary retelling of this engaging and timeless tale rich with human emotion and universal drama, enhanced by a brilliant musical score, and accented by unforgettable performances by Sanjay Dutt, Saif Ali Khan, Raima Sen, Diya Mirza and debutante Vidya Balan. Come. Be captivated by the intensity and depth of relationships. Come immerse yourself in the sheer passion of love and the harsh anguish of separation.

Sarat Chandra Chattopadhyay (Parineeta, Devdas..) is a legend in Indian literature. His home state, Bengal, virtually worships him, and deservedly so, for his novels resonate with deep and universal emotions and are populated by unforgettable characters. Sarat babu, as he is popularly called, belongs to the rare breed of male writers who are gifted with an almost psychic insight into the female heart. His ability to see the essential woman, veiled as she was, in thick layers of social conditioning, in the confirmatory nods to custom and tradition, and in a cloak of self-deception that females wore out of habit, was novel for its time. In fact, Sarat babu was often able to articulate female wants and desires that even the women of his era, themselves, did not know they possessed.

Parineeta, one of his most beloved novels, is a story rich with characters and ripe with emotions. It weaves together a compelling tale so utterly believable, so identifiable and universal in its impact. The story never ages. Just matures with time. (From BollywoodMojo.com)