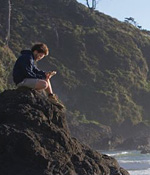 Like most college kids at one point or another, Christopher McCandless held a righteous rage. An underlying current of idealism flowed through him with all the torrential unpredictability of the Colorado River.

It is unfortunate most college grads rapidly lose their idealism after meeting the harsh face of reality and monthly bills. McCandless was an exception, an extreme one at that. His idealism would turn out to be his undoing.

Rebelling against his well-to-do parents and figuratively choking on the silver spoon of a well-heeled lifestyle that paid his way through Emory University with 24 grand left to spare, McCandless was driven to disappear on his parents and sister Carine. Egged on by the likes of Henry David Thoreau and Jack London, young McCandless took off in his dog-eared Datsun on a cross-country trek to Alaska in a quest for his idea of ultimate freedom.

Buoyed by the movie’s lush cinematography and a raft of new songs from Pearl Jam’s Eddie Vedder, it’s easy to romanticize McCandless and his misguided vision quest that takes him from urban Georgia to the prairies, down to Mexico, through California and on into the wild of Alaska.

As part of his endeavor to tell that story and recreate a lost, romantic world where men lived off the land, pondered the meaning of life, and wrote navel-gazing journals, Chris created a whole new identity for himself and adopted the moniker “Alexander Supertramp.”

Surely it was that free spirit that caught Sean Penn’s imagination. Perhaps Penn can relate to his desire to lash out at all of the world’s injustices, whether real or perceived.

Perhaps the greatest value of Christopher’s adventures comes from a fairly obvious observation, but one Christopher didn’t arrive at until it was too late, that happiness is only real when it’s shared. (M. Anderson, Movie Habit)