Profile of Singer for Joy Division 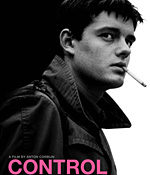 Ian Curtis, the lead singer of the band Joy Division, committed suicide at the young age of 23 in 1980. His widow, Deborah Curtis, wrote a book about their relationship called Touching from a Distance. Now photographer and music video director Anton Corbijn has adapted the book to the screen as Control (opening for one week only at Landmarks Ken Cinema).

As with the recent Irish film Once, Control impresses in the way it defies expectations about what a film with music should be like. Once redefined movie musicals with its more realistic approach to staging numbers, and Control redefines the music biopic by also taking a more realistic approach to its material. Control has more in common with the British New Wave films of the '60s, particularly the ones featuring angry young men from working class backgrounds than with such recent music biographies as The Doors, Ray and Walk the Line. And believe me, that's a good thing.

Curtis' life presents a lot of familiar ground for a rock biography yet Corbijn diffuses the cliches with his attention to detail and his insistence that he is making a portrait of a particular individual. His low key, casual approach proves compelling and effective. And because there is an emphasis on character, you donâ€™t have to know anything about Curtis, Joy Division or post-punk bands to appreciate the film.

Dutch filmmaker Anton Corbijn treats Control like a working class story in which one of the characters happens to end up in a band. We find Curtis (played by 10,000 Thingsâ€™ lead singer Sam Riley) in drab and dreary Macclesfield, a once thriving textile town. He writes poetry, seems a bit solitary, and definitely harbors a rebellious attitude. He hooks up with some other youths and they decide to form a band. At the same time, he takes the very conventional route of getting married early to a local girl named Deborah (Samantha Morton) and having a kid. He also maintains a nine-to-five government job helping to employ the mentally and physically handicapped in appropriate jobs. (B. Accomomando, KPBS.org)