When the Road Bends: Tales of a Gypsy Caravan

Back by Popular Demand 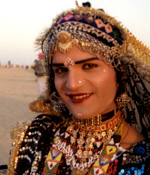 It's hardly surprising that Gypsy Caravan, a lively and lovely music documentary, is rife with whirling rhythms, wild, soaring melodic lines, the ululations of singers steeped in centuries of Romany tradition.

What comes as a revelation, though, is that this chronicle of a 2001 cross-country American tour by a disparate crowd of gypsy musicians manages to reveal as much about the performers as the songs they play. From septuagenarian patriarch Nicolae Neascu of Romania, to Esma Redzepova of Macedonia, to Antonio El Pipa's flamenco ensemble of Spain, to the colorful clique of Hindi brothers in the Indian gypsy band Maharaja - Gypsy Caravan captures the soul of the players as well as the soul in their music.

Directed by Britisher Jasmine Dellal and shot, in part, by the great cameraman Albert Maysles, Gypsy Caravan tags along as five groups from four countries travel together across the States, performing to audiences from New York to San Francisco, Miami to Austin. But Dellal also follows the musicians around their homelands, from the most rural patches of eastern Europe to the camel carts and markets of northern India.

Johnny Depp, who has shared his movie-set trailer with a few of the musicians featured in Dellal's doc, is interviewed about the magic of the music, negative cultural stereotyping of Gypsy people, and so on. Fine enough, but mostly Gypsy Caravan lets the musicians speak, and sing, and dance, and play, for themselves. (S. Rea, Philadelphia Inquirer)

When the Road Bends: Tales of a Gypsy Caravan