Joe Strummer: The Future Is Unwritten 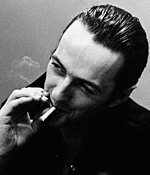 Director Julien Temple (The Great Rock 'n' Roll Swindle, The Filth and the Fury) is the perfect director to tackle the life of a punk rock legend from The Clash. From early footage that captures the band playing back when they could barely hit the right chords on toward their huge success, it's all here, along with interviews with such luminaries as Bono, Johnny Depp, Jim Jarmusch, Martin Scorsese, and many more.

Joe Strummer: The Future Is Unwritten