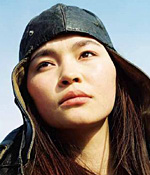 This spiritual adventure story was shot in Mongolia and directed by Peter Brosens and Jessica Woodworth. The film ambitiously melds a political critique of modernism with a deep respect for nomadic tradition and the value of shamanism, a spiritual perspective that embraces mysticism and a reverence for nature and animals. Brosens and Woodworth have made an unusual work that challenges us to choose the mysteries of the spirit world over the reason of commercial ventures that mine and destroy the riches of the earth. (Frederic and Mary Ann Brussat)