Pete Seeger: The Power of Song

A Portrait of the Uncompromising Folksinger That Influenced a Generation 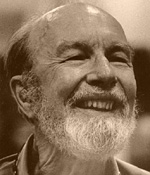 As he ambles through his 80s, Pete Seeger has been collecting his share of tributes: honors at the Kennedy Center from President Bill Clinton; a paean from a fictional colleague in John Updik's short story "Licks of Love"; a lively CD of folk songs from Bruce Springsteen and a gaggle of talented session players; a rousing song on Steve Earle's latest album. Not that Mr. Seeger is one to sit around and bask in approbation. As the latest tribute â€” Jim Brown's loving documentary, "Pete Seeger: The Power of Song" â€” makes clear, he's still busy, still angry, still hopeful, still singing.

Mr. Seeger does not perform as much as he used to, and his reedy tenor has lost some of its force, but he still chops wood outside his home in the Hudson Valley, protests against war and plays the banjo about as well as anyone ever has. Those of us who grew up on his songs sometimes take him for granted, as our youthful enthusiasm for his versions of "Abiyoyo" and "Froggy Went a-Courtin'" give way to more sophisticated pleasures, like Mr. Springsteen or Mr. Earle. But Mr. Brown's documentary reminds us, with admirable thoroughness, why we shouldn't take Pete Seeger for granted.

The film uses standard documentary methods â€” old clips and recent interviews with old-time colleagues like Ronnie Gilbert and Lee Hays and present-day admirers like Mr. Springsteen and Natalie Maines, all of it accompanied by plenty of music â€” to offer an affectionate, detailed portrait of its subject. The most touching and revealing moments come when Mr. Seeger's wife, Toshi, and their three children recall some of the challenges of living with a stubborn, itinerant folk singer. When you hear their accounts of how he built the family cabin with his bare hands on a hillside in Beacon, N.Y., you begin to see what a deeply American, fundamentally conservative temperament he has.

And this impression is deepened as you reflect on both the content of his music and his methods of making it. Famous as he is, Mr. Seeger seems to exist outside of, and in opposition to, the commercial machinery of celebrity. His sensibility is cosmopolitan but also agrarian, devoted to land, family and community â€” to traditional American values, you might say.

In two years he'll be 90. He is an institution and a monument, but also a living presence whose best songs grow less quaint and more urgent every day, and who can drive some listeners crazy even as he moves others to tears. If you watch the video (included in this film) of him singing "Waist Deep in the Big Muddy" on CBS in 1968, youâ€™ll know just what I mean. (A.O. Scott, New York Times)

Pete Seeger: The Power of Song