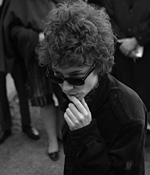 Jean-Luc Godard once said that the best way to critique films was to make one. Director Todd Haynes did precisely this with Far from Heaven (2002), which more or less used a Douglas Sirk framework to discuss Sirk's films as well as a more modern look at racism and homophobia. Now Haynes does it again with his exceptional new I'm Not There, a deconstruction of the biopic as well as a fascinating look at the cult of celebrity, and, on a deeper level, the celebrity as a godlike being with answers to all our questions. Whereas most biopics are made solely for the purpose of providing a rich centerpiece role (and, hopefully, an Oscar) for an ambitious actor, Haynes deliberately subverts this by casting seven different actors -- of all different ages, races and even sexes -- to play Bob Dylan. (Jeffrey M. Anderson)