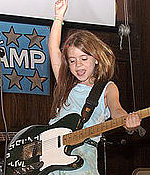 NOTE: The Wednesday 7:00 show will feature special guest rocker Marie Schow, who will introduce the film and take questions after the show

Portland's Rock 'n' Roll Camp for Girls isn't just a week-long retreat where preteens learn how to become the next Joan Jett. It's an incredible feminist project that reclaims the Spice-Girls-tainted concept of girl power by helping young women love girlhood in all its awkwardness – while they play power chords with their amps set at 11…The film uses an aesthetic borrowed from zines, music videos and campy mental hygiene films, a Kathleen Hanna-heavy soundtrack and tons of sociological data. Most impressive, however, is the fact that they refuse to portray Rock 'n' Roll Camp as idyllic, exposing the flaws – catfights, pariahs – that exist even in a girl-positive space. (Sarah Liss)