The Diving Bell and the Butterfly 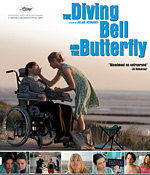 The Diving Bell and the Butterfly is based on the memoir by 42-year-old Elle editor Jean-Dominique Bauby, played by Mathieu Amalric. In 1995, Bauby suffered a debilitating stroke that left him with "locked-in" syndrome, in which his entire body was paralysed but his mind was unaffected. The doctors quickly discover that Bauby can communicate by blinking, so he works closely with two therapists (Olatz Lopez Garmendia as his physio and Marie-Josee Croze as his speech therapist) and they gradually develop a time-consuming but effective method of communication…. this is a beautifully directed, superbly written and brilliantly acted drama that is both deeply moving and genuinely inspiring. Unmissable and one of the best films of the year. (Matthew Turner)

The Diving Bell and the Butterfly