We've Been Trying To Get This For Years and Finally – A New 35mm Print! 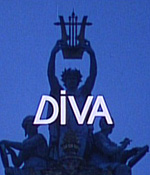 Early in Jean-Jacques Beineix's directorial debut, Diva (1981), the character Gorodish (Richard Bohringer) is described as "going through his cool period." Much the same could be said of Beineix with this film -- a work that simply oozes cool, but in a very special way. Beineix had spent 10 years working as an assistant director when he made Diva, and he obviously knew this was his one big chance. As a result, he crafted the most attention-getting film possible -- and it worked. Suddenly, French movies were hip again. He dropped back to the foundations of the French New Wave -- both stylistically and in choice of material. The mystery thriller was a fundamental of the Cahiers du Cinema -- the French film magazine that helped give birth to the New Wave movement -- crowd. But he also made it his own, adding elements of fantastic romance and intellectualism. At bottom, it's a stylish thriller about a young man, Jules (Frederic Andrei), who makes a bootleg recording of a famous opera singer (Wilhelmenia Wiggins Fernandez). The recording gets mixed up with one that incriminates a police official in racketeering and murder, setting the thriller plot in motion. However, the thriller aspect -- entertaining as it is -- is ultimately secondary to the characterizations and the film's all-pervasive style. It's a beautifully layered work that's much more than a showcase for Beineix's talent. (Ken Hanke)