"Sometimes in a smaller theater… you find an independent film that is miraculous." 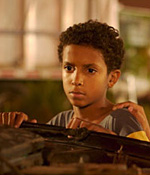 Such a film is "Chop Shop," by Ramin Bahrani, the Iran-born American director whose "Man Push Cart" made such a stir three years ago. That film was about an immigrant from Pakistan trying to make a living in New York with a rented coffee-and-bagel cart. It was shot on a shoestring in less than three weeks, and won the critics' prize at London and three Independent Spirit Awards, including best first feature. It embodied, I said in my review, the very soul of Italian neorealism. Now "Chop Shop" is another film about making a hard living in New York City, and with more time to film and stunning performances by his very young actors, Bahrani has made an even more powerful film. It is set in Willet's Point, Queens, and stars a 12-year-old boy named Alejandro Polanco and a 16-year-old girl named Isamar Gonzales, playing a brother and sister who share a tiny room above an auto repair shop… Now we have an American film with the raw power of "City of God" or "Pixote," a film that does something unexpected, and inspired, and brave. (Roger Ebert)