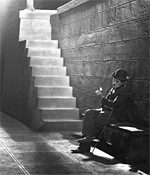 City Lights (1931), subtitled "A Comedy Romance in Pantomime," is generally viewed as Charlie Chaplin's greatest film - a "silent film" released three years after the start of the talkies era of sound. The melodramatic film, a combination of pathos, slapstick and comedy, was a tribute to the art of body language and pantomime - a lone hold-out against the assault of the talking film... Chaplin was responsible for the film's production, direction, editing, music, and screenplay... The tale of blind love again presents the famous Little Tramp character - an outcast, homeless man with his baggy pants, tight coat, cane, large shoes and small hat who first appeared in 1914 (and gave his final appearance in Modern Times (1936)). This 'silent' film is the quintessential Chaplin film - with superb examples of Chaplin's (the Tramp's) acting and artistic genius. (Tim Dirks)