Half documentary, half animation; a funny, entertaining salute to dissent 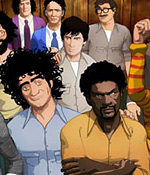 The winter dumps are officially over: The first great film of 2008 has arrived. "Chicago 10," Brett Morgen's audacious, ambitious and improbably affecting chronicle of the 1968 Democratic National Convention in Chicago and the notorious trial that followed, not only brings to life one of the sorriest chapters in American cultural and political history, but breathes new life into a film genre that usually has all the imagination and verve of a visit to Madame Tussauds.

A spirited and often inspired mash-up of motion-capture animation, archival footage and a terrifically anachronistic soundtrack, "Chicago 10" stars the voice talent of Hank Azaria, Mark Ruffalo and Jeffrey Wright as Abbie Hoffman, Jerry Rubin and Bobby Seale, who with five other activists were arrested on conspiracy charges during the days of outrage and violence that broke out between antiwar demonstrators and Chicago police (by way of Mayor Richard J. Daley's poisonous machine) outside the convention. The trial became a joke, with the erratic Judge Julius Hoffman (the late Roy Scheider) presiding; Morgen calls his movie "Chicago 10" because much of the drama of the story came from the defendants' attorneys, the legendary William Kunstler (Liev Schreiber) and Leonard Weinglass (who voices himself).

Cutting between the animated footage of the trial (written from transcripts) and searing images of the demonstrations and their tragic outcome, Morgen plunges viewers completely into the anarchic, exhilarating, finally ambiguous world of 1968 America; his final stroke of genius is his choice of music, which includes a breathtaking use of Eminem's "Mosh."