See them before the Feb. 24 awards 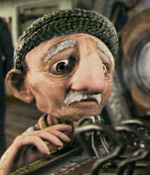 I MET THE WALRUS; Canada, Oscar Nominee: Josh Raskin
5 minutes, English, 2D Animation, Documentary
In 1969, fourteen-year-old Jerry Levitan snuck into John Lennon's hotel room with his tape recorder and persuaded him to do an interview.

(Note: this is not a double feature; separate admission is required for the animated shorts and the live-action shorts programs.)