With filmmakers in person! 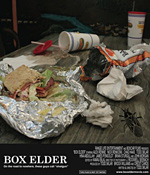 Box Elder is an independent film written and directed by Todd Sklar from the University of Missouri. The film follows the coming of age story of four college friends, Scott, Rennie, Brad and Bills. Borrowing aesthetics from the likes of American Pie and Clerks, watch them grow through relationships, break-ups, a road trip, shenanigans and tons of sandwiches.