Such ornery, dreaming, hopeless failures you can't help sort of loving them (Ebert) 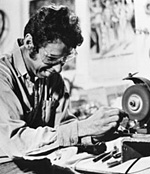 Here's a charmer about two good ol' boys who are bound and determined, as one reviewer perfectly put it, to get a stranglehold on the American Dream. Loyd and Frank live down around Austin, Texas, where they spend most of their time drinking booze and thinking up new ways to get rich quick. By the time the movie opens, they've already lost small fortunes (very small fortunes) as frog farmers, flying squirrel ranchers, and suppliers of polyurethane to rich hippies.

But now they stand on the brink of a really big thing. Loyd has invented something called the Kitchen Wizard, which combines all the worst principles of a mop, a floor polisher and a vacuum cleaner, and they've sold the rights for $1,000 to a patent attorney: Gray skies are gonna clear up.

The movie, which was shot on a shoestring by a Texas filmmaker named Eagle Pennell, has a wonderfully offhand way of describing the adventures of Loyd and Frank (played by Lou Perry and Sonny Davis). They come across as mildly profane, slightly insane, alcoholic Austin versions of Lum and Abner or maybe Mutt and Jeff. They're a team. They stick together because, basically, nobody else believes in their pipe dreams.

Certainly not Paulette (Doris Hargrave), who is Frank's long-suffering wife and has to listen not only to her husband's immature accusations and fantasies, but must also put up with pressure from the lustful Olan, her old high school sweetheart who has never figured out that graduation was 15 years ago. Paulette is the voice of reason in this film, so of course she is never listened to.

The movie has a gentle, genial way with its main characters, especially Loyd, who labors in his home workshop to invent gadgets that have little or no possible application. The direction is as laid-back as the characters, but there's a poignancy in Frank's visit to a clothing store to buy his first leisure suit, in their repeated failures to find and perform work, and in their dogged determination to have themselves one hell of a night out on the town.

The movie also has a subtle subtext. If its surface is basically a comedy about two lovable clowns from Texas, there's a tragic layer just underneath. Loyd and Frank are drunk almost all the time, and their boozing has two basic purposes: to celebrate occasions for which there is no reason to celebrate. And to recover from those occasions the morning after.

In a well-handled passage near the end of the film, the two old buddies go out into the fields with a treasure map, a dowsing rod and a hunting rifle, seeking buried gold. They find only a horseshoe. And then there is a haunting, ambiguous scene in which Frank, offscreen, puts a bullet through the brim of his Stetson, and we are left to speculate on whether the trigger was pulled by accident or in despair.

"The Whole Shootin' Match" is one of the best examples of a new regional American cinema (I call it the Wood-Burning Cinema) that's been creating itself in the last few years. It was financed and made totally in Texas by Texans (and in large part by Eagle Pennell himself). Its budget was around $30,000. It won't turn up in neighborhood theaters and may never be on TV, but it creates characters that are such ornery, dreaming, hopeless and precious failures that you can't help sort of loving them. (R. Ebert)