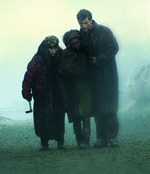 "Children of Men" takes place in 2027, in the grayest London imaginable, in a world where humans have lost the ability to reproduce. (The youngest person alive is 18.) The streets are plastered with literature entreating native Britons to smoke out and turn in illegal immigrants: In a world that's gone to hell, no country can afford generosity to outsiders. Terrorism and war have destroyed whole nations. Britain soldiers on, but for those who just can't take it anymore, suicide is encouraged: There's even a special government-sanctioned drug, with its own Lunesta-style commercial presenting death as a dream state you can just drift into, a vast improvement on the suffocating present.

"Children of Men," directed by Alfonso Cuarón and based on P.D. James' 1992 dystopian novel, is the bleakest movie I've ever wanted to see twice. Coming nearly 15 years after James' novel, it takes into account world events that she could never have dreamed of. Yet the picture doesn't so much build dread as smolder with it, as if we'd landed on a scorched, broken world still desperately trying to throw off some warmth.

And that right there is the Cuarón touch: The director of movies like "Harry Potter and the Prisoner of Azkaban" and "Y Tu Mamá También," pictures that radiate joy (even if, in places, they harbor their share of darkness), Cuarón at first seems like an odd choice to direct a pessimistic meditation on a world without children. But Cuarón is really the perfect choice: A filmmaker so responsive to joy and pleasure is our best guide to a world in which those essentials have gone missing. (If the picture had been made by, say, Lars von Trier, a filmmaker who fears for humankind but doesn't care much for people, a dystopia would just be business as usual.) "Children of Men" is a solemn, haunting picture, but it's also a thrilling one, partly because of the sheer bravado with which it's made. It left me feeling more fortified than drained. Cuarón, the most openhearted of directors, prefers to give rather than take away. — Stephanie Zacharek, Salon