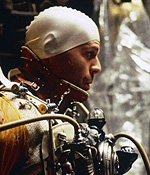 A career's worth of bizarre and elaborately spun fantasy films have brought Terry Gilliam ("Brazil," "The Fisher King," "The Adventures of Baron Munchausen") his well-earned reputation as the movies' resident madman. There's always overripe method to his madness, but in the new "12 Monkeys" Mr. Gilliam's methods are uncommonly wrenching and strong.

This apocalyptic nightmare, a vigorous work of dark, surprise-filled science fiction, is much tougher and less fanciful than the director's films have often been. Mr. Gilliam usually writes his own screenplays, but the contributions of a writer (David Peoples) whose credits include "Unforgiven" and "Blade Runner" may have something to do with a leaner style. In any case, "12 Monkeys" is fierce and disturbing, with a plot that skillfully resists following any familiar course. The film's hero fears that he's half-crazy, and for two hours Mr. Gilliam artfully keeps his audience feeling the same way.

"Twelve Monkeys" trips unpredictably through time, moving backward from a bleak vision of 2035. In that year, as the film begins, civilization has been driven underground by the aftereffects of a terrible plague. All but 1 percent of the world's human population was wiped out in 1997, and now animals prowl through the wreckage of abandoned cities. Below Philadelphia, power belongs to a handful of oddly sinister scientists who have made James Cole (Bruce Willis) their favorite research tool.

Like the Terminator, James is being sent from a ravaged future back to pre-apocalyptic times. Unlike the Terminator, James does not have a superbeing's power to alter the world's fate. Instead, he's a frightened prisoner of people he neither trusts nor understands, people who prefer communicating with him through a sphere dotted with tiny television screens instead of face to face. Scientists of 2035 want to know where the deadly virus originated, and James has such keen powers of observation that he is being sent to the past for research purposes, to trace the disease to its source.

He goes back to several different points in time. (Since "12 Monkeys" has the junk heap aesthetic that Mr. Gilliam favors, nothing in the film is sleek or foolproof, certainly not its time-travel apparatus.) So James first arrives in 1990, where his erratic behavior and intimations of disaster are not considered unusual. Almost immediately, he is sent to a mental hospital where plenty of other people share his worries about the world. One of them is Jeffrey Goines, a young patient whose nutty mannerisms are unexpectedly charismatic. After all, Jeffrey is played by Brad Pitt.

Mr. Pitt's mere presence has been known to lure audiences into movies that are otherwise unwatchable, but this time his powers as a neo-matinee idol are expertly used. Giving a startlingly frenzied performance, he electrifies Jeffrey with a weird magnetism that becomes important later in the film, when Jeffrey goes on to lead a guerrilla band of animal-rights advocates called the Army of the 12 Monkeys. ("He's seriously crazy," someone later says of Jeffrey, intending a sincere compliment.) Meanwhile, Mr. Willis holds the film together with his poignant, battered physicality, the suffering of a man fighting desperately for sanity and survival. When a doctor studies him closely, she sees a Cassandra complex. He is said to be suffering "the agony of the knowledge combined with the impotence to do anything about it."

"Twelve Monkeys" features Madeleine Stowe as Dr. Kathryn Railly, the beautiful psychiatrist who stays with James long enough to learn that his symptoms are not so easily diagnosed or dismissed. She treats him as a patient in Baltimore in 1990, and she is kidnapped by him there again six years later. Her composure is further rattled by evidence that James, who strikes her as delusional, isn't lying when he says he has firsthand World War I experience. Mr. Gilliam makes dazzlingly apt use of Hitchcock's "Vertigo" to capture both the erotic pull that brings James and Dr. Railly together and the insidious mysteries that keep them apart.

As written by Mr. Peoples and Janet Peoples (who base their screenplay on Chris Marker's 1962 short film "La Jetee"), and as directed by Mr. Gilliam with great flair for keeping his audience off balance, "12 Monkeys" unfolds in the inexorable, layered fashion of an onion being peeled. And it doesn't always track, since some transitions are kept deliberately abrupt and bewildering to underscore James's terror. James senses doom; he hears strange voices; he is buffeted through time unexpectedly; he fights for survival while heavily sedated, and he is tormented by a recurring memory with the quality of deja vu. In this, the best of Mr. Gilliam's evocative nightmares about modern life, the film maker's vision has never seemed more real.